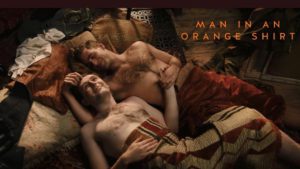 Patrick’s two part gay-themed drama, Man in an Orange Shirt, was the centrepiece of the BBC’s 2017 Gay Britannia season and was broadcast in the US on PBS in Pride Week in June 2018 and in other Pride celebrations around the world. It won the International Emmy for Best Miniseries in November 2018. Highlighting the contrasting challenges faced by gay male couples in the 1940s and the present, and blessed with an extraordinary cast including Vanessa Redgrave, it is a co-production between Kudos and BBC1. If you don’t live in an area where you can download it digitally, you can order it on DVD here.

Following the success of Man in an Orange Shirt, Patrick has been adapting A Place Called Winter
as a four part television series and would love to hear from producers interested in the project. A short horror film, A Slight Chill, adapted by him from his short story of the same name, is slated for production once the Covid crisis permits such things to happen. A feature film of Notes from an Exhibition, adapted by the playwright Helen Edmundson, is due to go into production shortly with director Anthony Chen.

Kansas In August
Adapted from his novel as a feature film with co-writer Ian (Venus Peter) Sellar. This was commissioned by the Really Useful Picture Group and subsequently developed by BBC Films, Carabosse and DNA.

Little Bits of Baby
Adapted as a TV miniseries from his novel. This was commissioned by the Really Useful Picture Group and subsequently developed by the BBC.

Adam and Steve
The first episode plus outlines of a gay sitcom commissioned by BBC2. The co-writers would have included Kevin (My Night With Reg) Elyot.

A Slight Chill
Adapted as a feature film from his short story about schoolgirl vampirism in Dangerous Pleasures. This was commissioned by Screenage Pictures. The same story is now to be filmed as a short.

Aunt Mary
An original feature film about a sensible, unmarried woman who falls in love with her teenage niece’s boyfriend. This was commissioned by Angela Pope, who was to have directed Kansas in August.

Rough Music
This was a feature film adaptation for  Ireland’s Great Western Films.

Think of England
An original feature film based on an idea by Paul Oremland. A gay teacher’s quiet life turns to nightmare when his lover is murdered and he discovers he was threatening to go public about sleeping with a prince of the House of Windsor. This was commissioned by Fulcrum TV.

The Housekeeper
Patrick’s feature length adaptation of this Rose Tremain short story about one of Daphne du Maurier’s secret lesbian love affairs, and the inspiration for Mrs Danvers, was on the 2018/19 Britlist of scripts deemed most worthy of being put into production. Sadly that has yet to happen!

Enquiries about any of the above projects should be directed to Yasmin McDonald at United Agents – see professional contacts.