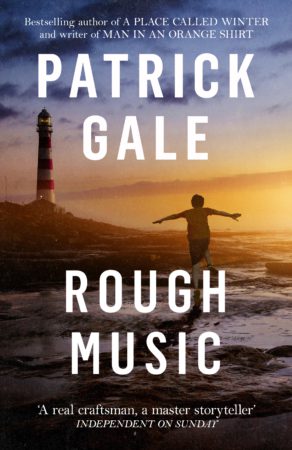 For his fortieth birthday, a gay bookseller is given a holiday in a seaside cottage in North Cornwall. He takes his parents, who need the break because the mother has early onset Alzheimers, his nephews and his married lover, who just happens to be his brother-in-law.

Meanwhile, back in 1968, the forty-something governor of Wandsworth Prison also takes his wife and small boy on holiday to Cornwall full of good intentions about the quality time he intends to enjoy with them.

But then his charismatic American brother-in-law shows up with his bolshie tomboy daughter and there’s a break-out at the prison and everything goes horribly awry. As the two holidays fall apart in a welter of truth telling and bad behaviour, the stories unfold around one another, the novel builds to a double climax and we come to understand that we are seeing the same family at two different points in its history.

But what terrible thing happened back in the sixties to make them the way they are in the present? Deeply personal, Patrick’s most overtly autobiographical novel to date, Rough Music’s unsparing portrayal of the painful realities of being a gay child (at whatever age), of unrequited married love, of losing one’s mind, made this the novel with which he has found thousands of new readers.

Here he is reading from it and being interviewed by Stephen Fry as part of All Families Have Secrets, a documentary about his work by Alex Harding screened in 2017 as part of the BBC’s Gay Britannia season. © BBC.

Rough Music is now available in the US as an eBook

Gale’s limpid prose, unforced and denuded of artifice, is more vivid and revealing than any snapshot, faithfully illuminating the vicissitudes of the heart, memory’s fragility and the wear and tear of habit on desire.

Patrick Gale is among the great, unsung English novelists. He has written a dozen books, each confirming a remarkable insight into his chosen subject, the vagaries of the human heart. His works attract large readerships – mostly women or gay men – drawn by the witty, pathos-filled analyses of how we conduct relationships, both within the family and outside. Gale has never mistaken self-publicity for literary importance. His novels form a quiet gathering, not a series of brash entrances. They impress confidently but gently, like those of the closest of his peers, Barbara Trapido, Helen Dunmore and Colm Toibin… If Rough Music sounds dark, it is rather – but marvellously so. Gripping, elegant and wise, it is Gale’s best book to date, and should not be missed.

Like the sea he describes so well, Patrick Gale’s clear, unforced prose sucks one in effortlessly. He is an expert on shifting perception and at unearthing buried grief and disappointment. Readable and finely written, this is a very good novel.

Gale unravels the details through dialogue as convincing as it is plentiful, while examining containment, fidelity and identity within a child’s universe and the years beyond. And his own identity is relevant, for if he were to adopt a female name, his wrought, quietly bubbling fiction might reach the wider audience it deserves.

Gale is a master at getting under the skins of his characters and revealing the undercurrents that drive apparently ordinary lives. A subtle, highly evocative tale of memory and desire.

Encompassing several fictional genres – family saga, gay love story, adulterous love affair – Patrick Gale’s excellent new novel
is, more than anything, a marvellous, page-turning, edge-of-your-seat story – Gale’s ability to evoke the emotional onslaught of love, the subtle awakening of sexual passion and the encroaching terrors of old age and illness are extraordinary – there are no false notes in this book.

Patrick Gale’s novels grip tightly, like swaddling clothes, stunning the reader into a state of lolling, contented absorption. How does he do it?… Overall the novel suggests that, although happy endings may unravel, our existence is worth having, that we should be of good cheer. No wonder Gale’s work is so mesmerizing, enfolding us while we are reading it in a well-woven
comfort blanket.

A highly civilised man writing for highly civilised people. But more significantly, his moral universe is also that of his subjects, and as a result this book acknowledges the importance of such grossly old-fashioned values as self-restraint, fidelity and forgiveness. But there may be a historical irony here, for as the English seek to rediscover an authentic sense of Englishness, these are the very values which they are beginning to consider to be the bedrock of their nation. Gale may yet receive the honour which this fine achievement demonstrates he fully deserves.

Gale shows abundant skill in differentiating between Julian’s childish and grown-up voices and in maintaining control over his busy, crowded and ultimately quite poignant narrative.

Too often it is simple grace that is missing from much contemporary fiction, but Patrick Gale’s Rough Music has enough for several novels… Gale writes beautiful, undulating prose, that explores the uneasy wanderings of the human heart, while rejecting neat resolutions or cheap sentiment. He paints his characters richly, drawing out their contradictions, hopes, shortcomings and humanity. He also examines each of the relationships here – mother-son, father-son, mother-daughter, father-daughter, lover-lover – with tremendous depth. Gale reveals the drama at the heart of the novel slowly, switching between the two holidays and letting each illuminate the other. The ease of his writing in situations that could easily resolve into clich&eacute;s produces
a novel that is anything but rough.

There is no way of quite conveying what a marvel this novel is… The psychology in this book is both constantly surprising and fully, achingly believable… It is the psychological and emotional depth that raise this book above the family soap opera it would have been in the hands of a lesser writer… Rough Music is as well crafted and as brilliantly structured and as richly realised
as any fiction we’ve seen in years.

In all his fiction and nowhere more triumphantly than in this latest novel, Gale gets under the skin of his characters, whatever their sexual orientation. If only straight novelists had the emotional insight across the board of proclivities that Gale demonstrates. And, though his loyal gay readership will pounce on this new offering with delight, this is not ghetto fiction.
None of his work is. He is a writer fired by the need to understand the people around him, and the world they have to negotiate. His conclusions are often grey, sometimes dark, but however tantalisingly inconclusive or challenging, they are never casually concocted. An intense, devastating story of non-communication, unvoiced desires and pitiful vulnerability.

Gale writes with emotional wisdom about childhood, sex, secrets and love between parents and children. Compelling.

Rough Music weaves a stunning tapestry on which is portrayed the treasons, deceptions, selfishness, tricks of memory, wounds and mercies that comprise family life.

Gale excels at writing about families and this book is no exception. The best writing in the book is about Frances, who in the present-day narrative is struggling with early onset Alzheimer’s. The tangled, fearful, confused and frighteningly lucid aspects of this disease are expertly rendered, with Frances’ occasional outbursts providing Gale with the opportunity to provide an uncensored perspective on the intrigue at the heart of this dysfunctional family. Similarly Gale’s treatment of ethical questions and sexual morality, refracted as it is through a lens of gay sensibility, is startling in showing how families will absorb even the most treacherous acts.

Richly rewarding. Gale leaves behind the comedy on which he’s built a reputation to explore how secrets, betrayals and missed connections come close to tearing a family apart. Gale uses detail to build a palpable sense of regret and emotional urgency. His treatment of issues like Alzheimer’s and gay love rises above the trendy and politically correct; his characters are so imperfect they are impossible not to love. If Oprah takes British writers, this is a shoo-in.

Gale is an English novelist with a particular gift for family dynamics. Cleverly structured and sophisticated in its treatment of time, his latest novel is an alternately sweet, touching and sombre tale of a mildly dysfunctional English family… Myriad shades of delicate feeling.

Rough Music is a touching examination of modern life. It movingly delineates the daily dangers of living and the absolute necessity of “carrying on”.There aren’t many of Patrick Gale’s novels available in this country. This new novel should remedy that oversight.

I envy the lucky souls about to read Patrick Gale for the first time. I’ll never forget the exhilaration I felt upon discovering his wryly elegant narratives, so full of compassion and contradiction. And Rough Music  is Gale’s most graceful and gripping work yet: a sort of omnisexual family mystery that reveals itself over the course of two far-apart seaside summers. I was torn between
a reader’s urge to devour it on the spot and a writer’s instinct to dissect and analyse every splendid sentence.

Though an exploration of sexuality does lie at its core, this novel is not about sex so much as a dysfunctional family struggling to understand itself. Gale places his family amid a national crime and a personal tragedy, slowly raising the veil of misunderstanding to reveal a gripping drama.

Touching and warm with the spectre of tragedy lurking behind every sentence, this is compulsive reading.

Sparkling with emotional intelligence and romantic seascapes, Gale’s latest novel is a compelling family drama. A gripping portrait of a marriage, and the quiet, devastating fall-out of family life.

Despite traumatic issues of betrayal and violence, he describes his characters with sympathy and charm and fills the book with inconsequential humour, highlighting the family’s resilience. He changes perspective to secure the reader’s understanding and insight into each character, assuming the voice of an eight-year-old boy, a forty-year old man or a middle-aged woman with precision and honesty… Rough Music is a painfully acute but never reproachful examination of a past that will not vanish.

Patrick Gale has been developing a reputation over the past few years as a master weaver of multiple narrative strands, and his latest triumph confirms it… The misery of Alzheimer’s is sympathetically and heartbreakingly conveyed. All in all, a compelling novel, written with a strong voice that is a pleasure to hear.

The structure of Rough Music is a masterstroke. Gale sets the two narratives on collision course, thus increasing the urgency of his novel; which is, in fact, a parable about sexual honesty and the love that can be built only on candour and passion. Gale is one of the few male novelists I have read who draws with sympathy and intelligence the contradictions and confusions of heterosexual women in conventional relationships. Gale is an optimistic writer. He takes care of his readers. It is worth pondering the epigraphs to this novel. They are all about loss, absence, desire and the terrifying inevitable resurgence of our own sexual betrayals, which we would rather not acknowledge. Gale is a master of register. Rough Music is, like all family histories, by turns disturbing and funny.