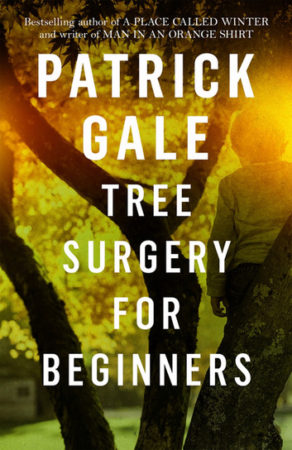 Lawrence Frost is a tree-surgeon, a man whose feelings run deeply but who is crippled by inarticulacy. To the despair of his theatrical mother and sophisticated uncle, he adores his wife and child but is in danger of losing both to a more glamorous candidate because of his emotional inadequacy. When his wife goes missing, presumed dead and he finds himself arrested on suspicion of murdering her he is close to despair.

His Uncle Darius comes to the rescue, however, and takes him on a cruise to the Caribbean, a voyage of discovery and a kind of purgatory in which Lawrence is punished for his hopelessness as a man even as he is tantalised by a taste of vivid, mutual passion.

Prompted by a passing obsession with bridge and by the lurid experience of being sent by Marie Claire magazine to cover a country and western cruise to find out “what country meant to women”, the novel is shot through with sly references to A Winter’s Tale. Like the Shakespearean original it begins in murderous darkness and passes through a pastoral interlude on its way to a succession of unexpected solutions. As in the earlier tale, women provide man’s harsh education but Shakespeare’s notorious “Exit pursued by a bear” becomes “Exit suspected transsexual pursued by a tiger”…

To order your copy through bookshop.org and so support local bookshops click here.

Read an extract from Tree Surgery for Beginners (PDF download)

Read an extract from Tree Surgery for Beginners (Kindle Preview)

Reviews of Tree Surgery for Beginners

You’re in for a ride with this one. You might find yourself laughing out loud. I certainly did.

Patrick Gale takes up the elements of the 18th century comic novel – abandoned babies, characters in disguise, the wanderings of a feckless youth – and recombines them into an elegant romance that manages to be both playful and wise. In prose of sparkling precision, Gale serves up misadventures – satirical, farcical and tragic – that embroil not only our hero but his entire extended family. True to its essentially comedic vision, the novel ends with lots of identities revealed and multiple happy pairings of all persuasions. With its subtle interplay of dark and light elements, Tree Surgery for Beginners is infused with a smiling, Mozartean sensibility, reminding us that we can “go so awry, break so utterly apart and still find the strength to continue”.

A fascinating novel which tackles all the big themes of life in an unexpectedly quiet manner, but with such enormous competence that it left me much moved and full of admiration. The narration keeps one in a constant state of surprise, while the psychological insight into the large cast of characters (and even the minor ones have a genuine solidity) is always trenchant and telling. The writing is always dense, subtle, elegant and highly intelligent. I loved every word of it.

The darkest moments are unputdownable.

I was delighted to get my hands on this paperback. Gale is a born story-teller, with the vivid imagination to match. What starts as a comic thriller keeping readers very much on the edge becomes more and more of a poignant tragedy as the plot unravels. Gale forces people to think about complex issues and controversial actions – and often to forgive them – by sneaking up at them from the wings and never bulldozing in there head-on. He is one of those rare writers with a gift for producing very readable books with credible plots which are still remembered months down the line. This is him at his best.

The real horror in this thriller lies in the ways mistakes in love continue to unravel lives down through generations. Don’t be deceived by the title: this is one scary book.

Gale’s energetic novel is a carnival of events in which credible characters find themselves in incredible situations.

The book is one of his best: a fluently constructed narrative underpinned by excellent characterisation. Running through it all is the theme of redemption; and the hero’s journey from despair to hope makes a stirring odyssey for the reader.

With his interest in manners and class, his delicate observations of the intimacies of loving and dying and especially in his invention of a town called Barrowcester, Gale and Joanna Trollope map a similar terrain. Artifice abounds, so does wit, and mystery along with some nice grisly moments. Gale, though, is capable of some piercingly tender moments as all the characters come to some self-knowledge and redemption.

Gale’s characters are put through the meat grinder of love: pushed to do bad things, punished by a course of harrowing exercises and redeemed only after they have earned it.

This is a sympathetic, gripping and cleverly crafted novel. I remained captivated.

This is a witty and highly entertaining journey. Gale uses the conventional narrative as a launching pad, weaving in exotic Caribbean diversions, transsexuals, tigers and a bracing infusion of sex and violence.

New Age America is grafted onto staid rural England, calypso onto Elgar, farce onto realism. Gale finds the dark side devilishly alluring and he has a great talent for contrivance. He especially likes to probe the weaknesses that make us vulnerable. Through all this, he creates the space to make the ordinary extraordinary and to find redemption where there was little evidence that any would be forthcoming. It’s a graft with just the right hint of corruption.

It is to Gale’s credit that he manages to make a statement about the bonds of familiar love out of this overheated, but never overdone, comedy.

Gale’s novel repays careful reading with its themes of organic growth, dismemberment and integration, culminating in a healing denouement. Gale’s story develops with such subtlety that the workings of Lawrence’s healing process must be taken on faith. Gale fashions a patient, worthy transformation as Lawrence develops from a boy who does not understand his whole self, especially the violent extremes, to a man whose work as a tree surgeon is a metaphor for the growth of his soul and his family.

I know real men don’t cry but I have to admit this one had me pulling out the hankie. The story’s about a man at odds with himself. Sad but true as they say and often funny.

In this very fine novel Patrick Gale proves, yet again, that he is both an exceptionally acute observer of human nature and a storyteller of the first order.

This is vintage Patrick Gale – witty, funny, poignant and utterly absorbing. Nothing is wasted in this novel. It’s a long, hard look at love, sex, violence, and other unconventional family values.

Patrick Gale writes like a mixture of Joanna Trollope and Mary Wesley. The writing is irritatingly good.

A modern-day myth of self-discovery, involving transsexual cabaret singers, tigers and long-lost twins. Family is redemptive and romance is not dead in this engaging story.

Thoroughly entertaining. Rarely, I assume, has a male written better about women. His females are quite outstanding. Lala is a comic creation of the first order and Lawrence’s mother is an exceptionally sensitive portrayal of an ageing beauty.

Gale weaves a hugely romantic, Austen-esque drama: coincidences, family deceptions, tragedies and affairs abound. The inevitable happy ending is, however, bittersweet. As ever the high points lie with his acutely observed characters: the central characters are wracked by uncertainty or insecurities and buffeted by the whimsy of fate, the supporting cast bolster them with often post-modern sureness… Another fine example of Patrick Gale’s craft.

Exerts the unmistakeable force of a novelist in the process of discovering a new, strong voice. With this alarming and technically very skilful romance, he is decidedly a man to watch.

The title seems to signal something wildly offbeat and kooky. In fact, what is delightful about Gale’s fiction is that is so warmly and convincingly illuminates ordinary lives and interests. His staples are difficult loves, botched careers, tangled family histories – mainstream stuff – with the offbeat only as an extra. A supporting cast of wonderfully eccentric minor characters adds to the readability and charm.

Gale’s plot operates like a spinning top. Part of Gale’s charm is the ludicrousness of what goes on as an abandoned, emotionally illiterate husband falls for a tall, ageing transsexual…Off-the-wall loners are drawn together by their strangeness as the novel spins from English crime fiction into Californian gender-bending black comedy.

A sublime story of a much-maligned hero more at home with plants than people.

Don’t miss this corker of a novel in which tree surgeon Lawrence Frost wakes after a night in his van to find himself arrested for murdering his wife. It’s hilarious and sad, packed with crazy coincidences and brilliant set pieces, such as the Caribbean cruise from hell where Lawrence is seduced by Lala, a chanteuse with a suspiciously deep voice and rather large feet. The message is that families, like trees, grow most strongly when they’re pruned. Terrific.

His heart-warming novels have amassed him a devoted legion of fans, and even the critics look forward to each new books… Expect the unexpected. That’s the advice given by previews of almost every one of Patrick Gale’s novels… Tree Surgery for Beginners is high in the drama, wit and immodest romance which will be all too familiar to his regular readers.

Gale is at his most insightful in his descriptions of character, both of individuals and of the Frost family as a whole. His heroines are as startlingly believable as his hero, and Lawrence manages to be unforgivable on page one and pitiful enough to be forgiven by the end.

Geographically, and in its accommodation of a variety of sexual and non sexual relationships, the plot is all over the place. But that’s the point – and one that Gale makes a real virtue of – in an adventurous but confidently handled book, which shows the wisdom of straying from the straight and narrow.

It is part of the appeal of Gale’s novel that the possibility that his protagonist may be a murderer is treated as dispassionately as the certainty that he married in haste… The title indicates an overarching metaphor, but the image of the family as organic, rooted and connected despite age, the loss of branches, or separation of offshoots, is built cumulatively and by implication, without the need for the author to spell it out. One of the pleasures of the novel is this combination of fastidiousness and seriousness. For all the cattily observant writing, Gale’s underlying moral world has an old-fashioned feel to it. His characters are redeemed by romantic love, by having children or by discovering (approximations of) the family unit. The paraphernalia of Tree Surgery for Beginners may be of the moment but the hopefulness of the narrative and the solidity of its central character make it a lasting creation.

Patrick Gale describes his latest novel as a modern fairy tale. Its literary roots lie in the late plays of Shakespeare. The hero’s violent jealousy links him to Leontes in A Winter’s Tale while his adventures on a storm-tossed island echo The Tempest. Add two separated siblings who could have walked straight out of Cymbeline, throw in enough improbable coincidences to put pantomimes out of business and you have a mixture that may be rich but is never dull. … consistently entertaining but also, in places, quietly moving. The deracinated hero, with his existential despair, is very well done; while the women who buttress his fragile ego are also delineated with skill and feeling.