home > The books > The Cat Sanctuary 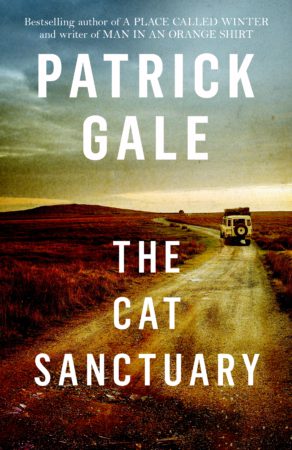 Joanna, a Junoesque American photographer shares a lovely, lonely retreat on Cornwall’s Bodmin Moor with her novelist lover, Judith. On an assignment to an African principality, she feels compelled to meet up with Judith’s estranged sister, Deborah, whose husband has just been murdered by a bomb meant for someone more important.

Impulsively she rescues Deborah from the respectable compassion of in-laws and brings her back to Cornwall to recuperate, unaware of the devils this will unleash in her womanly paradise.

As Judith struggles to unlock a new novel and Deborah struggles to keep locked up the girlhood horrors neither of them has yet confronted, the three women are caught up in a battle that is no less bloody for being so domestic.

The Cat Sanctuary draws closely on the landscape of bleak moorland and rain-sodden valleys in which Patrick was then living. Acutely aware that all his novels until then had featured gay men and stung by critic Joan Smith’s accusations of misogyny in Little Bits of Baby, he actively turned in another direction here, setting himself the creative challenge of spinning a narrative in which there are only two men, one who dies on the novel’s first page, one who proves to be less than male. Cornish country communities tend to be matriarchal but Patrick here had fun exaggerating that to the point where he shows a community in which men are both invisible and redundant.

You can also buy Patrick’s audiobook recording of the novel. Click here to listen to an extract.

Read an extract from The Cat Sanctuary (Kindle Preview)

Reviews of The Cat Sanctuary

This is a tranquil black comedy about secrets, about hidden disabilities, about places where you think you’re safe – but where appalling things happen. It makes great reading.

Patrick Gale leads the reader on and on through his minefield of deviance, unhappinesses, weaknesses, relationships in families and their resolutions. It is impossible not to want to know what is to happen along the way, and therein lies its true strength.

Written in a compulsively readable style, The Cat Sanctuary probes beneath the surface of these womens’ lives and is a disturbing study of child abuse and male violence and sexuality. But the novel’s warmth and humour also make it ultimately an affirmation of relationships… The perfect book for a cold winter’s day.

After reading one of his novels it is possible to return to it whether it is after hours or months and re-open it at random and just start reading again. The novel’s world is re-attainable at a moment’s notice… Sophisticated in its conception and stylish in its execution, it is easily his best novel to date. Another book to read and re-read.

Much of this is very funny, but that should not obscure the fact that Gale’s comedy is rooted in the acceptance of the inevitability of pain.

A powerful and moving novel in which the darkness is often lightened by the author’s deft touches of comedy.

The Cat Sanctuary is a treat to be gobbled greedily. It celebrates the strength of women. It is wonderful that a male writer can present so sympathetic and perceptive a picture.

The Cat Sanctuary is a book with claws. It has a soft surface – a story set in sloping Cornish countryside, touching on love, families and forgiveness, delivered in a gentle, straightforward prose – but from time to time it catches you unawares… Scratch the surface of life, suggests Gale, and you draw blood.

The itch to give the author a good smacking for some outrageous coincidences and voluptuous flings gives way to admiration for his splendidly realised Cornish moorland setting, wellies, ruts, dripping sheep, hardly a man in sight…Gale’s special forte being pathos into bathos, tears of desolation leaking in to the gravy, but he writes about the difficult emotions with delicacy, perception and a rare ferocious charm.

Characterised by the wit and compassion Gale’s admirers have come to expect.

Gale’s novels always catch one a little short with their flaky situations and obliquely deranged behaviour. .. It is only later – when that slippery charm has conveyed its resilience to everyday brutalities never far away – that his books reveal their grace and beauty… While no less light-footed than its predecessors, The Cat Sanctuary has darker intimations…The tone is gentle rather than militant, as though the crushing masculinity the women have experienced might find some small antidote in the tender mercies of his style.

A dark tale of loss, sex and mistrust… A sensitive, thoughtful novel with a conclusion that is both unsettling and consistent.

Full of Freudian nightmares which threaten to overwhelm the ordinary, everyday landscape… Gale’s writing is marvellously entertaining, and there is a compelling sense of biting deep into the core of the bitter truth.

Like Gale’s previous novels, it’s an elegantly menacing, enjoyable read that starts as it means to go on – dynamically. The Cat Sanctuary presents people’s lives and coiled springs, wound tighter and tighter until suddenly they unleash themselves on their nearest and dearest… It’s a deep and moving book; highly recommended.

Wonderful detail of food and landscape and acute observations about the pain that can either drive people apart or help them come together make this a novel of constant change but constant pleasure. Appealing, intelligent, sometimes richly comic, sometimes intensely moving – always a bloody good read.

Gale is a charmingly idiosyncratic writer who could not write a cliché if he tried. Spiced with mischievous irony, this engrossing story contains some interesting aperçus on the process of novel writing.

Gale unsheathes the most difficult emotions with compelling observation, elegance and charm and, best of all, he knows when to stop.