home > The books > Kansas in August 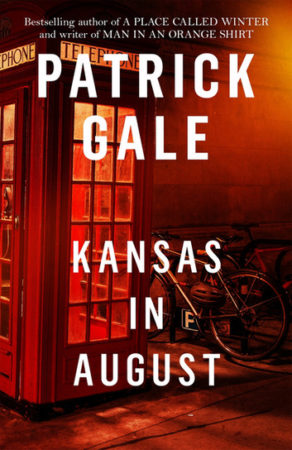 A young teacher with a secret tap-dancing habit, Hilary lives his life as if it was a Rodgers and Hammerstein musical, fuelling his optimistic search for romance with doses of South Pacific and The Sound of Music.

When he stumbles upon an abandoned baby in a subway and takes it home with a drunken view to taking care of it his little life turns upside down. A process not helped by his strict psychiatrist sister, Henry, falling into bed with Rufus, the man her brother is vainly trying to persuade out of bisexual confusion and into gay domestic bliss.

The last of Patrick’s Bayswater novels, this was inspired by work he was then doing for a journalist friend who had accepted an advance to write every other other alphabetical entry for an encylopaedia of the British and American musical before realising he didn’t have the time to do the work. Spending his days immersed in Rodgers, Gershwin et al, his nights vainly pursuing an approximation of romantic happiness and the periods in-between bicycling through some of West London’s more run-down reaches, Patrick turned the spotlight on himself and his preoccupations.

Sumitra Sharma, Hilary’s landlord’s little girl who builds a secret hybrid religion around her fixation on him and her belief that he has spontaneously given birth is the first instance of a recurring interest in childhood in Gale’s work.

To order your copy through Bookshop.org and so support local bookshops, click here.

To hear an extract from Patrick’s recording of the audiobook, click here.

Read an extract from Kansas in August (Kindle Preview)

Reviews of Kansas in August

Patrick Gale is a young British novelist of astonishing originality and a steadily darkening vision.This romantic turmoil is mockingly played out against a backdrop not of Shakespearean moonlight and magic but of utmost urban squalor, a setting that gives this comedy of errors more edges than any traditionalist could have planned.

Gale does for London what Tama Janowitz does for New York and Cyra McFadden did for Marin County… Add to this that Gale turns 26 this year, and it becomes clear that we have a rather daunting talent on our hands.

The bawdy narrative strands are cleverly woven together with witty and urbane dialogue and piquant characterisation, so that the reader is thoroughly absorbed in this irreverent tour de force.

Patrick Gale’s Kansas in August is a marvellous entertainment. Part fugue, part farce and part fun-house, it roves from romance to wit from satire to terror. It’s an astonishing accomplishment.

The novel seems deliberately light and frothy, so that even potentially serious issues (abandoned babies, racist and homophobic attitudes) are skipped over, and the whole thing ends, rather like one of the Rogers and Hammerstein musicals to which Hilary is addicted, on a cloud of champagne bubbles. At his rate of production, however, Mr Gale will be a mature novelist by the time he is 30.

Mr Gale falls between two stools. He writes neither with real satire nor about emotional truth. He is gently witty at times but his comedy lacks edge and the whole effect is bland and rather irritating. I suspect this irritation stems from the suspicion that he has a real talent which is submerged under a pose of camp sentimentality. It remains to see whether the pose will become the reality or whether something more substantial will appear.

A blacker than black comedy that delights on every page.

It is clearly my duty as a good citizen to bring this all-singing, all-dancing infant down a peg or two by rubbishing his latest novel. Well I wish I could, but I’m sorry to say that Kansas in August is not a book to be slammed, damned or panned. It is the work of an accomplished writer. I believe the correct critical term for the book is assured… Patrick Gale, on the strength of this modern, excellent and sympathetic novel, seems to me to be bound for greatness.

Gale writes easily on the eye and can mimic answering machines very well. But is this enough?

A gripping novel about a particularly bleak, insidiously unpleasant and all too imaginable day after tomorrow, a thoughtful picture of society in decay in smnall ways. This however is but the backdrop for a touching narrative about complex human relationships and emotional and physical expectations. Patrick Gale’s characters are never less than endearingly human: their frailties are all too recognisable, their anticipations understandable. Though the setting is squalid, hope shines through. And – most of all – Kansas in August balances pathos with laughter.

It is Gale’s best book this year. The writing is more controlled, the characters have more depth, and the silver spoon optimism of his earlier books has given way to the more attractive self-doubt of the mid-twenties over-achiever. But while his blend of artifice and realism is not quite like anybody else’s, one is left with a suspicion that he is still skating on the surface of his talent.

Mr Gale has one decisive fault as a writer: he tries too hard. He also allows his sub-plots to beguile the reader’s attention. Here the incidental descriptions of Sumitra, a 12-year-old Asian girl who adores Hilary from afar, are a great deal more interesting than the sexual quadrille enacted by the major characters.

It’s a short and very funny story, one that could have been developed much more; there is huge potential in the story of a gay man and a baby, their relationship to each other and to the world outide. A little more tension and struggle might have enriched the farce.

Despite its title (a dig at the hero’s addiction to Rodgers and Hammerstein) all the action of Kansas in August takes place within a square mile of Shepherd’s Bush Green. However, the ethnic diversity of that area and the sexual versatility of the book’s young protagonists allow the author to introduce us to a surprisingly wide variety of human types and foibles. Mr Gale has a wry wit. I think that he must have been somewhere else when Mr Fowler was trying to frighten us with all those nasty AIDS ads.