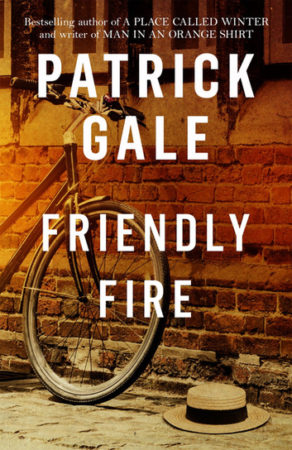 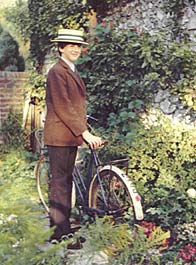 Patrick off to Winchester College at 13.

Friendly Fire is structurally simple, in that it is told from a single viewpoint and presents events in chronological order. In some ways it is autobiographical in a manner similar to the structurally more complex Rough Music, in that a large chunk of his own experience is threaded through the heart of it. Where the latter novel drew on his memories of a late 60s childhood however, Friendly Fire deals with a late 70s adolescence…

To order the book through bookshop.org and thus support local bookshops click here.

Here’s Patrick being interviewed about the book by Stephen Fry and in conversation with his old schoolfriend, Rupert Tyler about it. This is an extract from All Families Have Secrets, a documentary by Alex Harding broadcast by the BBC in 2017 as part of its Gay Britannia season. © BBC.

Rather than simply serve up a slice of memoir, Patrick has again used fiction as a way of exploring the ambivalent truths that lurk behind superficially happy memories, untangling the comfortable narrative that memory has woven from his past. By transforming his actual school, Winchester, which admitted only boys in his day (things are about to change!), into the (only slightly wilder) fictional Tatham’s, which admits a few girls on charity, he is able to turn an unflinching, female eye on every aspect of his all-male teenage years. And that female gaze proves less forgiving than his own memory might have been.

As a foundling who has spent all her life in institutions, Sophie is well-trained to survive life as a scholar in an ancient boarding school. No amount of homework, however, can prepare her for meeting and falling hopelessly in love with Lucas. Wealthy, Jewish and an exotic contrast to the rough-edged boys she has grown up with, he draws her into a tangle of forbidden passion which seems doomed to end in disgrace. But Sophie’s other, surer love affair is with education. She succumbs to the glamour of learning and the beauty of the place in which she finds it, but she also learns other, tougher lessons in the world beyond the school’s high walls, about class, families, mother-love and the havoc they can wreak.

Patrick writes: I didn’t realize until my twenties, when almost every man I became involved with seemed to be suffering from a delayed adolescence and its attendant hang-ups, that my teens were extraordinary for one simple reason. I had a gay adolescence that exactly coincided with my biological one.

Even today, most gay people feel obliged to keep their sexuality a secret until they at least leave home and find some kindred spirits. I was incredibly lucky, not only to know I was entirely, irreversibly gay when I was eleven or twelve, but to find myself in a like-minded gang from 13 onwards.

Friendly Fire is a work of fiction and Tatham’s, the ancient boarding school in which alternate chapters of the novel are set, is a fictitious place I have used in previous work, most obviously in my novel Facing the Tank. That said, any old Wykehamists in their early 50s will recognize elements – buildings, geography, customs, slang – curiously reminiscent of Winchester College in the late 1970s.

Possibly as a function of impending mid life, I found I was obsessively going over events from my teens, in particular an intense platonic friendship that had died abruptly upon my leaving the school. I began by attempting a revenge novel in which a 40-something, otherwise well-adjusted gay man becomes so haunted by memories of time in a privileged boarding school that his relationship breaks down. He would, I decided, take his revenge by writing anonymously to the wives of various old boys who had tormented or betrayed him, asking them how much they knew about their husbands’ adolescences.

This morphed into a story about the same man befriending the widow of a tormentor from his schooldays, but I found that all the energy of the story was coming from the past and since I had a yearning to write a far simpler narrative than anything I had tried for years, I dumped the framing device and homed directly in on the school story.

Through a naïve crush, Sophie stumbles on her school’s gay subculture and ends up befriending, challenging then championing a coterie of gay boys whose openness and experiences are fairly close to the ones I shared with my gang. We didn’t sleep with one another – nothing so destabilising – but we shared confessions of whom we had slept with or dreamed of sleeping with. We swapped precious gay knowledge gleaned from trashy American novels and magazines, we supported one another through what would otherwise have been five desperately lonely years, abetted one another’s crushes and affairs, dissected one another’s families, subverted our present surroundings and mapped out our glamorously liberated futures. We were, in short, a kind of aberrant sisterhood in an officially heterosexual, all male society. When two of us shared a study, words cut from magazines and pasted on the door proclaimed us “Sisters Under the Skin”. The school wasn’t chastely heterosexual, of course, any more than any boys’ boarding school can hope to be. Who was sleeping with whom, who was whose “little man”, was discussed as openly as cricket results or the merits of the latest Playboy centrefold. For truly gay teenagers, however, Winchester was an intensely romantic and erotic experience, with sex not only readily available but available in settings of unparalleled beauty. The great difference, of course, was that most boys were only marking time, seeking opportunistic release like so many prisoners, whereas we were a quintet of proper, Gay News-reading poofs, looking for love where they wanted only a shag, and as such perceived as tainting company.

Just how blessed our existence was was brought brutally home to me when a master threw himself under a train the night he was sacked for persisting in spending time alone with a boy whose parents had complained about the friendship. The tragedy rocked the school and, of course, held five of us especially enthralled. We were lucky, it seemed, to have the sort of parents who were too preoccupied or embarrassed to acknowledge who the school was allowing us to become. A version of that scandal lies at the climax of Friendly Fire, along with a lethally complaining parent, included in a spirit of retrospective, there-but-for-the-Grace gratitude.

The novel is full of wild invention, not least in having an aristocratic master respond positively, and dangerously, to just the sort of love letter I might have sent him, but the feature that will strike many readers as most fantastic of all – 14 year olds allowed to be openly gay in a 1970s public school – is drawn entirely from life.

ILLUSTRATIONS
In a unique innovation among Patrick’s books, Friendly Fire was illustrated throughout. These pen and ink illustrations by Patrick’s husband, Aidan Hicks, are used at the head of each chapter. Patrick and Aidan’s hope was the recreate the fondly remembered feel of illustrated novels they had read as children.
Anyone interested in buying the originals or in commissioning work from Aidan can e-mail him by clicking here.

Friendly Fire is now available in the US as an eBook

Gale has written a classic story of subversion from within which remains reassuringly warm and old-fashioned throughout.

It is precisely two years since A Sweet Obscurity – Patrick Gale’s 12th work of fiction. Friendly Fire, populated by a set of familiarly winning adolescents, is somewhat blunter than its predecessor. In the first 300 pages, there isn’t a single fatality. But it is no less impressive.

Gale reverts to a single chronology and setting: a church school. There is little room for its adult protagonists, though each emerges as trustworthy or damaged. Instead, Friendly Fire describes with thorough brilliance the destabilising onset of male puberty. Typically, Gale opts for an unpredictable point-of-view: the observations of one of the school’s few girl pupils, Sophie.

Raised in a children’s home, she has rejected attempts to foster her and arrives at school apparently ill-equipped to deal with the social assumptions of an intake which – herself apart – ranges from the middle-class upwards.

But Sophie understands institutions, which affords her a sure-footed immunity among the chaotic, emotional manipulations that have long-characterised English school life. She falls in with two superficially assured gay youths: the exotic, Jewish Lucas, and a blond cricketer, Charlie.

Gale’s chief trick is in relating how the boys’ emotional and sexual initiations are cannily interpreted by someone beyond them. Still, as Friendly Fire focuses on the vexed question of teacher-pupil relationships, she is left as clueless as the boys whose unchecked passion leads them into danger.

The book is characterised by a coherent narrative arc. Its author’s abiding concern – the perverse vicissitudes of the heart – is not stinted. But Sophie is stripped not only of gender certainties and family ties, but also of the comforting immediacy of bourgeois conformity, which her school embodies and demands surrender to. Her discomfort throws into relief – and into question – the values which her surroundings reflect and require.

Friendly Fire is another triumph for Gale. It is part of an oeuvre which looks ever more formidable, particularly for a novelist still in mid-career.

Friendly Fire is an intense tale of love, life, intellectualism and passion. Inspirational.

Patrick Gale’s precise, delicate style in Friendly Fire lends itself well to a story of adolescent turmoil in the hothouse environment of a public school where the narrative, if not the language, is occasionally in danger of becoming overwrought… Emphasising the heated significance with which everything is imbued in adolescence, Gale’s finely tuned rites of passage novel depicts a learning curve of passion, betrayal and shame.

Patrick Gale is a writer who has always seemed particularly well-attuned to the assorted agonies and ecstasies of childhood, and while at times Friendly Fire may read like a junior version of Donna Tartt’s The Secret History, the emotions still ring true.

Gale has crafted an engaging coming-of-age novel, which plays as part regendered autobiography and part classic “English schooldays” book. Audaciously, Gale writes the book from the point of view of a teenage girl – and succeeds with aplomb. A very enjoyable read from one of Britain’s finest novelists.