home > The books > Facing the Tank 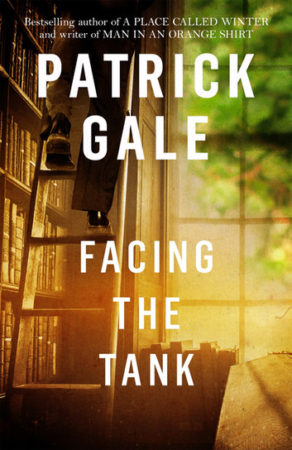 Evan Kirby, an American academic specialising in angelology and demonology, visits the English cathedral city of Barrowcester (pron. Brewster) to pursue his studies at the cathedral’s ancient library.

There he finds that the chintzy perfection of the place masks a network of passionate secrets – one woman on the run from the cardinal who impregnated her, another haunted by her feral child, a young man breaking the news to his parents that he isn’t gay after all, a careworn son reluctantly consigning his mad mother to a home, a bishop with doubts and a bishop’s mother with a serious cannabis cookie habit. Even as supernatural elements seem to conspire to wreck Evan’s latest undertaking, he finds himself surprised by love. The earthly paradise is revealed to be full of poisoned apples but one after another its inhabitants are offered a taste of sweet redemption.

This was written at Foncoussières, a remote hamlet in the Tarn valley. Patrick had escaped London, tempted by his agent’s suggestion he might enjoy housesitting an eminent musicologist’s chateau in exchange for keeping the cats fed and the harpsichord and piano played. Shot through with nostalgia for his childhood home, Facing the Tank is a homage to Trollope and to Firbank.

Arguably Barrowcester first appeared Patrick’s professional debut, the short story Borneo, collected in his first anthology, Dangerous Pleasures. A smug, pretty cathedral city slap in the middle of England’s well-to-do rump, it appears here as an affectionate and detailed lampoon of Winchester, the author’s home town, but reappears repeatedly in the later novels – most substantially in Tree Surgery for Beginners and Rough Music – and is reassessed on each appearance. Winchester then makes a star appearance, undisguised, in The Whole Day Through.

To order the book through bookshop.org and thus support local bookshops, press here.

To hear an extract of Patrick’s reading the audiobook, click here.

Read an extract from Facing the Tank (Kindle Preview)

Reviews of Facing the Tank

The peculiar title – the entire peculiar novel – has to do with eccentricity raised to an art form, which is also a fair description of Patrick Gale’s disturbing, alluring and idiosyncratic fictional vision.

Patrick Gale writes with great zest… I kept on reading because I was perpetually astonished to find what Mr Gale had thought up next.

If you can imagine a cross of Barchester Towers and Rosemary’s Baby as written by Muriel Spark, you may have some idea of what you’ll be facing with Facing the Tank. There are plenty of good, careful English novelists whose grasp exceeds their reach. Gale is by contrast a very imaginative bull amidst the Wedgwood, and like whatever creature is disrupting Barrowcester, he’s determined – and deserving – to be noticed.

Facing the Tank is irresistibly witty satire and a metaphor for all that is assumed to be false yet winds up, inevitably, true.

Gale has carried off yet another ridiculously crazy tour de force… The plot ricochets between the dozens of richly drawn characters, and one of the many reasons to devour this novel at one go is that it will make it easier to keep track. Some other reasons are that this book is a delightful read, albeit a strange one, and that if started at bedtime, pages will be turning inevitably into the wee small hours. If E.F. Benson, Iris Murdoch and Fay Weldon were to produce a story in some mad collusion, the result might be something like this.

A commendably intelligent, entertaining and, at times, moving novel.

Facing the Tank is literary. Patrick Gale is a writer who loves words, who loves constructing them into edifices, and who does so with enormous skill. His novel anatomises the cathedral town of Barrowcester and is full of vivid characters and insights. There is no doubt about the superabundance of Patrick Gale’s talent.

Gale has created an environment and a credible and predominantly middle-class cast which marry together the macabre tales of M.R. James and the waspish wit of E.F. Benson. But Gale adds to this potent brew an ingredient already evident in his previous novels: compassion for the human condition. For Gale has a fondness for his characters and a deep tolerance of their foibles which shines through his writing even when he is creating an individual at best unlovely and at worst thoroughly unpleasant. Assured and immensely enjoyable.

Original and amusing. Patrick Gale is an elegant, witty writer with an engagingly bizarre imagination.

The first thing that catches the attention about Patrick Gale is a sardonic eye, an engagingly leery way of looking at life, or the half-life he has chosen as his base in Facing the Tank. It’s as though Cold Comfort Farm had called in the interior decorators.

The close world of The Close is tea-cosy warm. But not for long, as Patrick Gale speedily unleashes his merrily black mischief. Suddenly there are rats and worse in belfries, madwomen in every attic. The uncovering of the sadness behind the doilies and twin sets is in the best traditions of black humour.

Patrick Gale is a mocker. He is intoxicated with words and feeds upon them with a kind of manic relish. But he will not desecrate the thing he mocks. Barrowers may live in a narrow, smug, rich world but they are tough enough to survive shocks with imaginative politeness. The humour here is patient and kindly. The sheer funniness of Facing the Tank made me laugh out loud. Its optimism delighted me. I could very well believe that a New Jerusalem might indeed be green and pleasant.

Mr Gale has established a niche as a purveyor of slick high-campery (and, in this black tale of diabolism in a sleepy cathedral city, High Churchery) which will always command a market.

Gale’s fourth novel, set in a cathedral city, seethes with a rich cast of characters.

The burden of being human is the difficult process of living everyday life, but the reward – the salvation, as it were – is the transcendence achieved through sexual passion. This odd reversal of Christian dogma is present in all of Gale’s work, but it is in Facing the Tank that he begins to explore more fully the spiritual and mystical aspects of his vision. Gale’s touch is light and magical. Like Iris Murdoch (whose early novels his resemble) Gale is able to convey a truth about the human condition – and especially about sexuality – by using the most extreme examples and experiences in the most curious of circumstances. For all their quirks and quasi-religious underpinnings, Gale’s characters are vital, moving testaments to the durability of the human spirit and the transforming powers of sexuality.