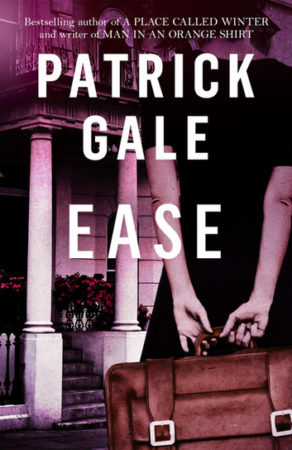 Domina Tey, a successful playwright on the brink of unwilling middle age makes a brief bid for eccentricity and independence. In search of inspiration and a little adventure (but nothing too dangerous), she walks out on her academic hubby and beautiful Bristol home to take up residence in a house of bedsits in Bayswater.

Under an assumed identity she can’t resist entering the lives of her fellow residents, including an aspiring “actress”, a young French waiter and a beautiful aspiring priest. Mistaking life for plot, Domina meddles, with consequences as tragic as they are funny.

A delayed reaction to his brother Matthew’s death in a car crash aged just twenty-five, Ease took conscious inspiration from Patrick’s first address as an independent young thing – a third floor bedsit in 71 Linden Gardens, London W2. He had an eccentric French landlady who had such deep respect for Art that, when she heard he was trying to become a writer, she insisted on saving up his rent cheques until he received his first publisher’s advance. At the same time he was working as a temporary typist for a basket importing firm on Westbourne Grove, Ronald Kaufmann, where his supervisor was a chain-smoking ex-mortician – a woman immortalised as Tilly Widdowes, Domina’s libertarian landlady. On finishing the novel, a respectable aunt remarked, “Well he certainly seems to be doing some living up there!”

Like The Aerodynamics of Pork and Kansas in August, Ease was written directly onto a Brother electronic typewriter – those precursors of PCs, with cruelly limited memories. When the screen flashed up memory full! that tended to mark the end of the chapter, hence the slimness and speediness of the narrative.

To order the book through bookshop.org and thus support local bookshops click here.

To hear an extract from Patrick’s recording of the audiobook click here.

Ease is now available in the US as an eBook

A study of mismanaged eroticism and misunderstood mysticism.

Like his fellow countrymen, Tom Sharpe and John Mortimer, Gale can produce chuckles in waves, all the time getting in stiff jabs beneath the humour. Ease deals with a marvellous assortment of oddballs who live (or at least try to) in a spaced out boarding-house in Bayswater. Patrick Gale has genuine affection for his characters, all of whom have hysterical things to say about the human condition. This is a charming novel, which displays a talent with remarkable gifts. Outstanding.

The Coast Book Review Service, US

The plot of Patrick Gale’s novel is almost secondary to what he does best: characterisation. Tilly’s roomers are fascinating people, each with a new and wonderful story and personality twist. The dialogue is strong, witty and captures the Queen’s English beautifully. Ease is a gem of a book. And it is such quick reading it can be handled easily in one sitting.

What makes Ease such a good novel is that the author trusts his story to speak for itself. He does not diminish it by trying to explain too much. Domina has all the sensible modern opinions about abortion, infidelity, divorce, homosexuality, but we really don’t know what Gale thinks of these issues. For him they exist as part of the lives of people in his story and these everyday lives are too profound and mysterious for simple judgements.

So off Domina goes to an unprepossessing room in an inelegant neighbourhood where she hopes to get out of her privileged rut. With scarcely a pause she begins to write a play about her situation and the other people in her boarding house. But as she plays with these earthy folk, the consequences are far graver than she could have imagined; this is life, all right, and it’s not what she’d bargained for. Ease is a second novel by a young Briton whose gifts and insights are notable.

A sleek and silky novel.

Patrick Gale writes with the understated fluency that is the hallmark of contemporary British fiction, and with the irony that usually accompanies it. Like William Boyd and Martin Amis, he skilfully blends the light and the dark, moving unobtrusively from comedy to drama without losing narrative momentum or integrity.