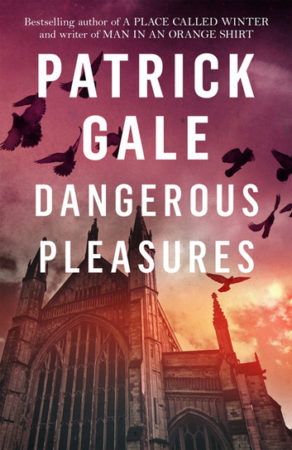 This collection of stories is a celebration of Patrick’s first ten years as a published author that also celebrates the friends for whom each story was written.

The stories range from Borneo, his first published story which was shortlisted for the one-off Whitbread Short Story Award back in 1985 and arguably his first excursion to Barrowcester, to Wig, a nightmarish fable of murder and make-up written specifically for the collection.

Winning him many new readers, despite a hideously inappropriate chocolate box dustjacket, it also attracted what were then the best reviews of his career.

The collection has now been reissued in a bumper book of Patrick’s shorter fiction , Three Decades of Short Stories. To order it through bookshop.org and thus support local bookshops click here.

You can buy Patrick’s recording of the collection as an audiobook. Click here to hear an extract.

The stories deal with revelation, with what people can become given the right set of circumstances and with the danger that comes with change. Sparky stuff.

He excels at capturing emotion and while his sexuality and vivid imagination throw up unusual situations, he deals poignantly with universal themes of love, loss and embarrassment.

These delightful stories are just as entertaining as Gale’s many well received novels. Particularly fond of miserable women and petulant children, the collection includes a Barbara Pym-ish skit about the denizens of a cathedral close, a cautionary tale of a bad-tempered girl who gets locked in a wardrobe, and the story of a long-suffering wife who decides it’s her turn to receive oral sex.

Patrick Gale revels in absurd risks. It’s the promise of an unexpected, and potentially implausible, outcome that entices you into his stories; acts of liberation (usually sexual) continually teeter on the brink of humiliation. The prose sizzles with acidic observation. Playing generations off against each other, Gale squeezes every last drop of bitterness from the desiccated udder
of middle-class domesticity.

These tales are fabulous for being what short stories so often aren’t – complete, in that they don’t need ten other chapters to finish them off. Gale’s skill is to lure us in to everyday situations with his casual style and then sock it to us with a fantastic event, look, word or appearance which throws the whole thing into sharper, frightening focus. He’s damn funny, too.

Gale pins down the pain of love and leaving and the no-man’s-land between the apparently real and the illusory. He writes of uncertain memories and threatened loyalties and, in Dressing Up In Voices, of a couple whose passionate, inevitable
break-up is traced with unrelenting accuracy.

Patrick Gale has long been a master of short fiction, from the neo-Firbankian novellas to the richer comic realism of The Cat Sanctuary. So it comes as no surprise to find that his first collection of short stories shows him to be an adept of the art. The dangerous pleasures of the title are the dark passions that lurk beneath the veneer of respectability. Marital life is, at best, routine
and, at worst, murderous. Gale subtly subverts the familiar rituals of middle class life and revitalises popular settings like the girls’boarding school, where the ghost of Angela Brazil is confronted by the fangs of Bram Stoker, and the cathedral close, where the Trollopian tensions are enlivened by an ex-escort agency worker, a nun nicknamed Knickers, and a malodorous Dutchwoman who chokes to death. Wit and wisdom, metaphor and moment constantly combine to delight.

The world in which these stories have their being could scarcely be more substantial. Close attention is paid to the facts of social existence – to the clothes characters wear, the food they eat, the things they value. These are voracious consumers. These people’s lusts and disgusts are similarly palpable. Desire makes their faces flush, their hearts thump and their knees buckle. The earlier knockabout comedy has been largely replaced by a sense of desire thwarted, power wielded unthinkingly, impending ruin. The world is a dangerous place and the body count is high – people keel over mysteriously in their prime, contract killer diseases, suffocate in cupboards. Cosy they aren’t, but the stories in Dangerous Pleasures are nattily subversive, sexually ambiguous, intelligent and disturbing.

Gale is a master of character, and he slips under the skins of his women protagonists with such wit that it’s often hard to believe he’s a man. From the misplaced passions of a jilted writer to the housewife whose life is changed by a blonde wig, these fresh, clear-headed stories are reminiscent of Gale’s back catalogue of acclaimed novels.

Not one of these eleven stories is a dud. All of them are concerned with the fallout that occurs when soft-focussing fantasy collides with hard-nosed reality. The lingering after-effects lie on the sweeter side of bleak. Witty, moving and very much alive.

Gale treads David Lynch territory: these stories have a slight edge of surreality, as they peel away the veneer of social and sexual ‘normality’ and uncover something more exotic and dangerous underneath. But unlike Lynch’s work, these stories are essentially comic. Bad things happen, certainly; people die, but even death is a cue for transformation. And, neatly sidestepping politically
correct clichés, it is more often than not the young people who are the prudes, and their elders who have learnt to swing. Patrick Gale clearly knows his business. He pulls it off with verve to spare.